It is that time of year for pumpkins.  The actual carving and scooping out the guts of the pumpkin has been designated to my husband since the beginning of this tradition.  I really don't like the slimy feeling.

Posted by The Adventurer at 08:00 2 comments

We are continuing our studies and while looking at some books decided to create a house from the Catal Huyuk period and a river fishing boat from 4000 BC used in the River Euprates.  We had left over clay from when we practiced our Cuneiform writing.

We had a fun day learning and creating!  Kids were so excited to show Daddy what they had made!

Having begun our studies in Mesopotamia we took a slight detour to understand the history of writing.  This discussion came up after visiting the British Museum and seeing cuneiform writing and the famous Rosetta Stone. 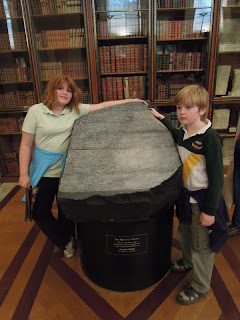 While observing the Rosetta Stone (this is a model) the children were able to see the 3 different writings on the Rosetta Stone; Greek, Demotic and Hieroglyphs.  Which then brought out the question, "how do we know what cuneiform says and is there something out there similar to the Rosetta stone that helps us decipher Cuneiform."  While browsing the museum bookstore I a bought the book The Story of Writing by Carol Donoughue.

Cuneiform writing means "wedge shaped" and is believed to be first written around 3000BC.  The book first explains that the very earliest writing was pictogram shapes and then slowly evolved into more straight lines as it was easier to do on clay or stone.  The last cuneiform writing that has been found has been dated to 75 AD and then this type of writing fell out of favor as other forms of writing became more popular.

It wasn't until Sir Henry Rawlinson found a gigantic inscription in 1840 on a cliff near the town of Bisitum in Iraq that cuneiform writing began to be deciphered.  Here writings were found in Old Persian, Babylonian and Cuneiform.  Once Sir Rawlinson deciphered Persian and Babylonian he was able to decipher the Cuneiform writing.

The kids and I got out some clay and tried a little Cuneiform writing of our own.


It was a fun activity for us to try, but both kids felt our modern alphabet was a whole lot easier:)!!  Maybe they will complain less when doing their writing assignments from this point forward...I can only hope:).
Posted by The Adventurer at 06:00 7 comments


The wall mural idea started nearly 4 years ago when I first started home schooling the kids and they have since created 5 different murals that we have put up throughout the house.  It is a art project they still enjoy doing.  Since coming home from Tanzania the kids have been working on creating a wall mural  to show case all the different animals we saw in the Serengeti.

Posted by The Adventurer at 06:00 5 comments

I know I have done lots of re-enactment posts since we have moved to the UK.  However I have mostly concentrated on Vikings as that is my family's interest.  Recently, we went to an event that show cased some more modern eras.

It was quite interesting to see how military uniforms, weapons and vehicles changed over time.  Another great day out!
Posted by The Adventurer at 06:00 7 comments