Our little town has a Scarecrow festival every October.  It started about five years ago and has grown bigger every year.  There are a few people who hate the scarecrows and complain but fortunately they are in the minority.  The festival brings in tourist from other neighboring towns and it brings a little business for our local shops.  This year there are over 100 scarecrows scattered around town.  Here are a few of my favorites this year.


There is a voting system going on, so the scarecrow with the most votes wins the trophy this year.
We enjoy walking or driving around town to see who put up a scarecrow.  every year the themes seem to change and this year it is more skeletons and the Stanley cup. Some places are very creative:)!!!
Posted by The Adventurer at 05:00 0 comments

My husband and I try to get away as a couple every couple of years just the two of us to reconnect and to just be together. Since this was our 20th anniversary recently we decided to go away on a trip just the two of us.  My husband's dream is to retire in New Mexico one day so we decided to go back and visit and visit a few areas that we might consider living in one day.  In addition we took a few side trips and saw some interesting sites.


We had an amazing trip and it was nice to reconnect as a couple.  The kids did amazing on their own and can't wait for us to leave again, haha. The animals were still alive and the house didn't burn down so it was a success all around.  :)  I left MarioFan with a list of school activities to get done and he accomplished all of them, yay.

Posted by The Adventurer at 05:00 0 comments

For American History we are working towards the American Revolution in our Crash course studies. A field trip was organized to see a copy of the Southwick  Declaration of Independence at Washington University.  We signed up to go and learn some interesting facts about this copy.  The kids and I have seen been to the National Archives to see the handwritten copy several years ago.


ON July 4, 1776, 2 days after the approval of the resolution dissolving all allegiance to Britain, Congress adopted the Declaration of Independence.  Thomas Jefferson drafted the Declaration which Ben Franklin and John Adams edited (More on that later). Congress directed John Dunlap to print copies, known as Broadsides to be sent to every state and to the army.  (information taken from museum brochure) 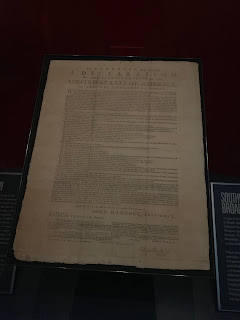 A copy of the Dunlap Broadside arrived in Rhode Island on July 6, 1776.  Solomon Southwick used that copy to print 29 copies and distributed them throughout the state.  These copies became known as the "Southwick Broadside". When Henry Ward, secretary of the sate assembly signed the broadside, he became the first person to sign ANY copy of the Declaration, preceding even John Hancock, whose name was printed on the broadside to attest its authenticity.   There are only 7 known "Southwick broadsides" copies that survived from the original 29 printed. (information taken from the museum brochure)


After viewing the document we had a short lecture about the edits made to the document.  Jefferson was know for being very intentional in his choice of words for the document and most of Franklin and Adams changes were very small.  However there was one paragraph that was completely omitted (I did not know this).

After this we were able to explore another exhibit Called Data Visualization through the years.  I thought it was fascinating.  The curator said this exhibit was in part due to a recently donated time line

My pictures do not do this amazing time line justice!


It was a great day at the University museum and we learn so much!  Do not forget to check out the museums in universities near you, you never know what they have on display!

This week my husband and I celebrate 20 years of wedded bliss:). It still feel just like yesterday and forever rolled into one. 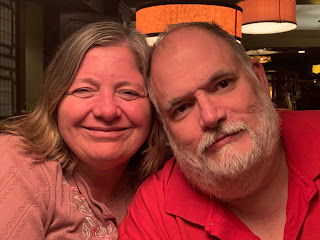 Every year my husband dedicates a song to me on our anniversary.  He choose this year Eric Clapton's "Wonderful Tonight".  It was particularly special as he played it on his guitar for me:).   Very romantic!


"20 years since we got married, starting the best 20 years of my life. It’s my annual tradition to commemorate our anniversary with something musical, since I’m not good at my own platitudes. This year she asked me to do something special, and play something myself for her. This should have vocals, but my singing voice makes Dylan fans cringe. Nor could I find a good backing track, so you get the stripped down version, complete with a couple of dropped beats and missed notes. But the sentiment is real, because, like every night, she is Wonderful Tonight."


I am still working on his present which is a stain glass window of Jimi Hendrix,  I need to cut out the background and then solder it all together.  Should only be a couple more weeks till it is done.

We are planning a couple get away very soon to reconnect and we are looking forward to it.