Around this time of the year I like to look back on where we started and where we need to go to see if I am falling behind on anything--I usually am! This gives me a chance to sum up all the kids have learned and help guide thru the next few months.

Math--Both kids are working on their respective Math U see book.  Fire drake is on Pre Algebra and MarioFan is working thru Epsilon.  ON target

History--This is the only subject the kids are doing together this year.  We started with the Civil War, worked thru the Transcontinental railroad, immigration, Industrial Revolution, and Women's suffrage movement.  Next we are going to look at how the West was Won, the destruction of the Plains Indians and the forming of the rest of the states in the mid west.  Hope to be at the beginning of WWI by June and for us to be working on learning (once again) about WWI through the summer.  ON target


Science--Firedrake is earning a high school credit working on Biology using the EO Wilson book which is free on iBooks.  Currently she is halfway thru book 2 and we want her to be completed book 3 by June.  Lab work is also included in this course  ON Target

MarioFan science took off in a completely different direction this year from what I posted I wanted us to do back in July!  Instead of working on cells and hereditary we spent time working on electricity and electrical engineering as he expressed an interest in this.  This month we are beginning to learn about Bridges and civil engineering and will be delving deep into this topic as well as completed many styles of bridges over the next few months!  OFF target from our original plan but ON target for what interests my son at this time:)

English--Firedrake is taking a high school Literature Class at a local coop and is doing excellent.  All aspects of English is covered in this class:)  ON Target
MarioFan has completed All about Spelling  book 5 (not sure if we will begin the final book 6 now or wait till this summer), working on growing with grammar book 6, using IEW to address writing and I am pulling various literature books out for him to read and complete either book reports , lap books or comprehension question.  ON Target

Drama--Both are taking this class at a coop  ON Target

PE--MarioFan is taking various sport class at a local place trying all kind of team sports out for 6 weeks, so far he has taken soccer, gym and basketball.  ON Target
Firedrake was to take a Fencing class last term but broke her foot and had to withdrawal from the program.  Her foot has healed and we signed her up to take Fencing this term:)! OFF target due to broken foot but getting back on target this term:)

Computer--MarioFan is taking a class at coop but I recently signed him up for Homeschool programming independent study which we are doing at home.  This is something he is very interested in so we thought we would try it out  ON Target

Firedrake is not taking any computer classes this term  but if the Homeschool programming works for MarioFan that may be something she does over the summer months:)


As I look back and am pretty happy with where we are this year!  According to my schedule book we are at 120 school days and over 600 hours.  My state requires 1000 hours.  We should easily met this by end of May or early June.  We tend to school a much lifter load in the summer months:)

So how is your School year going!?!

Posted by The Adventurer at 05:00 1 comments

Happy Birthday to Firedrake who turned  14 years old this week!!! 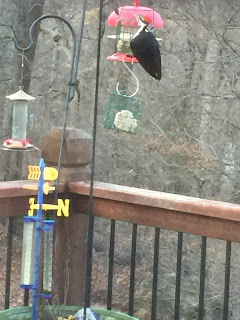 We took a field trip to our favorite museum-- The City museum and met up with some friends.  We tried to hit this museum at least twice a year when we can get in for homeschool price of $5 which is much better than the normal $12 admission fee. 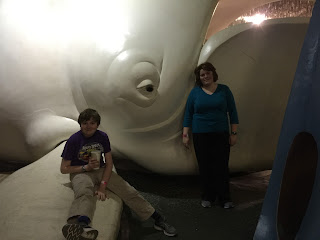 The hubs and I had a date night.  We participated in another Trivia night for a charity event.  Trivia nights are very big here in the St. Louis area!  Our team tied for second place, but after the tie breaker we came in third.   YAY team!


Firedrake worked on a Biology lab with her Dad measuring how much glucose is released from certain foods---basically she measured farts:) as she put it!


MarioFan is continuing to work on engineering and bridges.  We have spent the week looking at bridge structures and why certain ones are better than others. First we looked at which pillar would be stronger, columns versus a more triangular shape and why.


Next we read that Beam bridges are the simplest and earliest form of bridges.  Anything could make a beam bridge but the one draw back is they can only be used for short distances and we read why and did a simple experiment to look at the disadvantages of a beam bridge.


Next we read that Arch bridges were also one of the oldest bridge systems around and how the Romans constructed them.  We again did an experiment to demonstrated the pros and cons of this bridge.


Next week MarioFan will be building his own arch bridges, one out of plaster and one with his K'nex kits.  We are continuing to look at the vocabulary, forces, pro and cons of the arch bridge and the history of this type of bridge!

Posted by The Adventurer at 05:00 3 comments

We have been keeping busy and getting back  into our routine which always takes a little adjustment for the kids and I.  Coop classes have resumed along with all the kids extra curricular activities!

Both kids have earned A's in all their classes so far this year. While over the Christmas break I started to plan out our History lesson (both kids still work together on this area) and plan out science for MarioFan.  Firedrake is doing HS biology with her DAD.

I decided that I wanted to continue working towards the end of the Industrial revolution and continue with another important issue that was brewing during this era, Women's rights.  While it started in the 1830's it wasn't fully amended into the constitution until 1920.  We have been working on the Industrial revolution and the changes in city living for several months.  After this we will go back in time to concentrate on the way of life for the settlers and the eradication of the plains Indians.  Then we will learn about WWI again (we touched on this several years ago)


For MarioFan's science lesson he seems to have an interest in engineering so I thought he might like to work on learning more about bridges!    I am still waiting on a few resources that I have ordered to come in.


In order to introduce the topic to MarioFan I had hime build a few bridges and a look at why they may have failed succeeded.  We haven't done any reading yet so he will discover the answers to why some of these models worked and why others did not work very soon.  This was just my way of introducing the topic and sparking the interest! And as you can see by his face his was very interested in this process!

Over the next week we will be discussing what made some of our bridges work and why they may have failed!  We will also be learning the parts of bridges and discussing forces, tensions and other vocabulary words relating to bridge engineering.  If you know of any resources and want to share please link them below:)

Posted by The Adventurer at 05:30 2 comments

We had an interesting Christmas break and now are fully back into our crazy homeschooling schedule! We had a little bit of excitement when a beautiful Cardinal flew into our garage....

Also our little town experienced major flooding just a couple of days after Christmas.  Here of some pictures of what our town looked like.  I have never seen anything like this before.  As fast as the water rose it also fell but not before causing major damages to businesses and family homes.  We got out to take pictures and to help with the sand bagging.


While on a break I started working downstairs in my glass studio.  I have several projects I wanted to complete.  I will have to find some free weekend to complete them but I should only need to put in a few more hours and both will be done this month.

MarioFan has completed his unit study on electricity here is is working on finishing our Alexander Graham Bell  project making intercoms similar to the earlier phones. 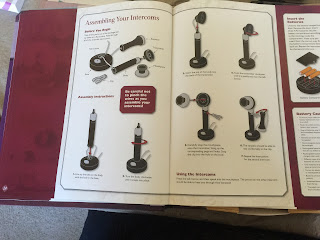 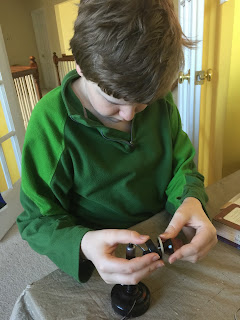 In our history lessons:

While I told myself I would do no school planning over the break I did plan out our history and science lessons for the upcoming months.  I will post more about those next week.  Looking at my schedule book the kids have already reached their 100 days for this year.  My state requires 1000 hours and we are already over half way done.  Soon I will do a post for our half year wrap up which helps me stay accountable to what we have accomplished:)

Posted by The Adventurer at 05:30 7 comments