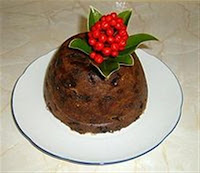 Another British Tradition around the Christmas holidays is Christmas Pudding:

Victorian England is when the Christmas Pudding began as a mainstay in British history and began as more of a Christmas Porridge called Frumenty, which was made of wheat or corn boiled up in milk. However there are reference to puddings as far back as the 1420's Over time other things were added: prunes, eggs, raisins, currants and sultanas and even meat. Plum pudding is steamed not baked which makes it very different from Christmas cake. Some families hide a silver coin inside the pudding and it said to bring good luck to whomever was fortunate to find it. However this practice fell away once real silver coins were not available, as it was believed that alloy coins would taint the pudding. Additionally, coins pose a real choking hazard. Other tokens are also known to have been included, such as a tiny wishbone (to bring good luck), a silver thimble (for thrift), an anchor (to symbolize safe harbor) or a ring (for future marriage).

The time for making a Christmas pudding is at the beginning of Advent. A Christmas pudding is said to be stirred from East to West in honor of the three Wise Men and made with 13 ingredients to represent Christ and His Disciples. The day became known as "Stir Up Sunday". Traditionally everyone in the household, or at least every child, gave the mixture a stir, and made a wish while doing so.

Presentation of the Christmas pudding is very important and always brings ooh and aahs to our Christmas table.

Add a spring of holly to the top of your pudding and then pour brandy on your pudding. Turn off the lights and light and watch the blue flame surround the pudding. Christmas puddings are often dried out on hooks for weeks prior to serving in order to enhance the flavor. This pudding has been prepared with a traditional cloth rather than a bowl.

After Brandy has been poured on top and set alight. best done in a darken room to see the blue flame!

Some Information and all pictures taken from Wikipedia, available here
If you're brave enough to try a recipe go to Mandy Barrow's "British Christmas Customs and Traditions", here

Although my family has done this tradition I have to say it is not our favorite it is a taste that you must grow up with I think. But the kids think it is really cool to see the blue flame:) I also must add we always buy our Christmas puddings at the store.

Be sure to link up with Worldwide Classroom if you have a lovely Christmas post you wish to share.
Posted by The Adventurer at 08:00