MarioFan keeps saying he wants to do something in electronics for a career.  For the past two years we have been working on learning python coding and building circuits using the program 42 Electronics.  I highly recommend this program if you are looking for something similar.   Their customer service is amazing!   MarioFan just finished the the fourth and last book in this program in Jan.

So for the next electronic skill he wanted to learn was soldering of electrical components.  We bought several different kits and soldering equipment and have begun.  Electric soldering is quite different from glass soldering but I am comfortable around a soldering iron.  We started with the European siren kit as it was the only one with written instructions that laid out a careful plan.  The other kits have on line instructions that I still need to down load. 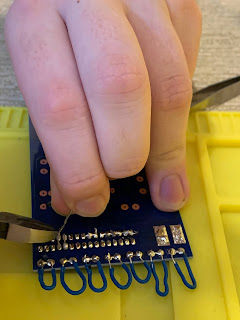 Next MarioFan began to assemble the siren project using the soldering skills he had learned over the last few days. 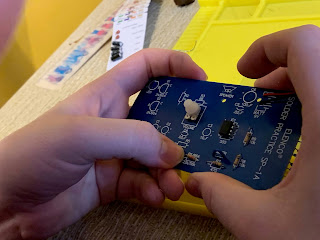 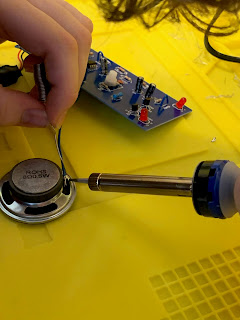 The last part of this kit was to learn to remove parts and add in different electrical components which meant using copper wick to remove solder.  MarioFan really struggled at first with this process as the manual says the copper wick they supplied was coated in Flux but it was not really removing any of the solder and taking such a long time which meant the copper wick was getting hotter and hotter to touch!  After consulting a friend, who does electrical work,  I brought up my glass flux and put the copper wick in to soak up more flux.

After changing the components the siren work but now emitted a different sound.  MarioFan enjoyed the process and we will be working on a new project soon continuing to build his soldering skills!
Posted by The Adventurer at 11:00 0 comments